The original church, actually built by the parishioners themselves, still stands at 4th and Howard. The present church was built for the growing congregation in 1870.

Behind the church is the old German Catholic School built in 1894. Next to the school is the Pre-Civil War Russell Building, a private residence, which became a music school and was finally purchased by the parish as a social hall.

Across the street from the school is the former St. John's Convent, built in 1881. The Rectory, next to the Church, was built in 1825. It was originally a stone building and later was enlarged and brick faced.

The parish has two cemeteries. The old cemetery at 8th and Pierce Streets and the modern cemetery at 20th and Mahantongo Streets.

Parishioners are proud of their reputation of working together for the benefit of the parish. An example of the pride was quite evident during the 150th Anniversary in 1991. A capital campaign committee was organized to raise funds for the church renovation. The goal was $250,000, but $469,573 was pledged.

Renovations began in 1992 with a number of projects to be completed over the next few years. While St. John's parishioners are proud of their church's physical building, the true spirit of the parish is shown by the list of numerous special and spiritual activities. 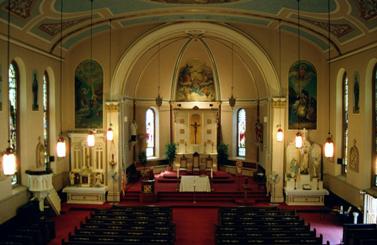 Until 1840, German-speaking Catholics in Pottsville had monthly Mass said by a Jesuit priest, Father Nicholas Steinbacher who rode on horseback from Reading to hold services in the basement of St. Patrick's Church. Available records do not say when Father Steinbacher began his visits, which he alternated with trips to Lebanon, Elizabethtown and Gettysburg, but they ended when his horse broke a leg during one of his trips to Pottsville.
Continue Reading>>